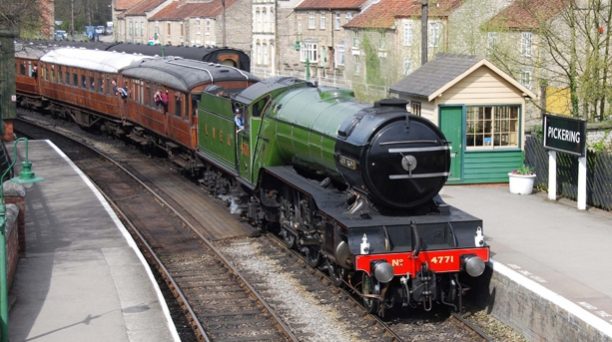 Pickering is an ancient market town and civil parish in the Ryedale district of North Yorkshire, England, on the border of the North York Moors National Park and popular for walkers and cyclists.

A few snippets to enjoy are as follows:

The Beck Isle Museum is housed in a Regency period residence near the centre of town, adjacent to the Pickering Beck, a stream that flows under a four-arched road bridge. It was here that William Marshall[25] planned England’s first Agricultural Institute in the early 19th century. The house contains a collection of bygones relating to the rural crafts and living style of Ryedale. The collection is not restricted to a particular period, but aims to reflect local life and customs and trace the developments in social and domestic life during the last 200 years. A selection of photographs from the Sidney Smith collection held in the museum are displayed around the building, particularly in the photography and model rooms. Sidney Smith was born in Pickering. He is thought of as a successor to Frank Meadow Sutcliffe of Whitby. The museum is owned by the Beck Isle Museum Trust and is staffed and operated by volunteers.

The North Yorkshire Moors Railway is a heritage railway. The 18-mile (29 km) line is the second-longest heritage line in the United Kingdom and runs across the moors from Pickering via Levisham, Newton Dale and Goathland to Grosmont. It is run by the North York Moors Historical Railway Trust and operated and staffed by volunteers. Pickering station has been its terminus since 1965 when the Malton-Pickering route connecting to the York to Scarborough main line was closed. Before the station became a terminus, the double-track railway took up the space now occupied by The Ropery (a road) and the car park to the east. Trains run daily from mid-March to early November and on selected dates through the winter. Trains are mostly steam-hauled; however in some cases heritage diesel engine is used. At the height of the running timetable, trains depart hourly from each station. During the summer months, steam services extend to the seaside town of Whitby. Passenger numbers have topped 350,000 in recent years.

Pickering Castle is situated at the edge of the moors. It is a classic, well-preserved example of an early motte and bailey castle refortified in stone during the 13th and 14th centuries, centred upon a shell keep crowning an impressive motte. There is an exhibition in the chapel.

Pickering Church has a Saxon foundation, but the earliest phases of the present building date to the 12th and 13th centuries, with substantial additions in the 14th and 15th. In 1853 restoration work revealed a series of wall paintings on the north and south walls of the nave. Despite a local and national outcry, the paintings were whitewashed, and only rediscovered and restored in 1876–78. They have been called “the most complete collection of medieval wall paintings in England”.[26]

our paninis are back with a variety of fillings available all served with crisps and side salad ;) although we are still serving a limited menu but have brought a few extra meals back. available to eat in and takeaway! ...

From Monday we have a few new changes, these include:

• All staff members will be wearing a face covering

• If possible please download the NHS app & check yourself in via the QR codes displayed around the cafe. Otherwise we will happily take your details

Although thing's have changed in the way we operate we're still serving the same great coffees, cakes & food🍴☕

Again thank you to all our lovely loyal customers for your continued support over the last few months. 🙂 ...

BREAKING NEWS!!
our locally sourced burgers are back as of tomorrow with a variety of fillings, so why not come on down and tuck into one of our delicious burgers!! ...

morning, what a beautiful day so why not pop on in and make the most of our last day of eat out to help help out and save yourself 50% off. big Stevie's breakfasts normally £8.95 but all this for only £4.47 with the eat out to help out offer. ...